Over the course of Europe’s refugee crisis, the world’s attention has been fixed on the dangerous journeys taken across seas and over land in search of safety from war and persecution. Less noticed, however, has been what happens to the refugees at their destination. For many, what comes after that journey is a new kind of trial, one that goes underreported but is in some ways more trying: the long wait to find out whether they will be granted asylum. Even as Europe works through an unprecedented backlog of applications, those years of waiting don’t grab headlines, but they have lasting effects. As an IPL team discovered, the wait presents an answer to the urgent question many Europeans are asking: why do some refugees find it difficult to integrate into their new homes?

Existing qualitative research has found that this wait is experienced not merely as an inconvenience, like a late train during your morning commute, but as exclusion or rejection, all the more demoralizing because it comes after trauma and stress at home and on the road. This research can only go so far, however; it can’t tell us how this experience shapes a refugee’s later life in the host country. Even though Europe is marshalling resources for the current crisis, it remains difficult to get large-scale, high-quality data on refugees, and then to link that data with asylum decisions and longer-term outcomes. In “Lives on Hold”, IPL researchers did just that, providing the first study to isolate the length of the wait time as a causal factor in asylum-seekers’ employment rates.

From the Waiting Room to the Workforce

The team looked at ten years of data from Switzerland, focusing on asylum-seekers whose claims were granted within five years of arrival. These refugees lived in temporary housing and received subsistence-level welfare support, faced restrictions on their eligibility for work, and on average waited 665 days for a decision on their application. On any one of those 665 days, they could have woken up to the news that they would be sent back to the home country they risked everything to flee.

That uncertainty and isolation take a toll. Not only do skills atrophy over the time away from the workforce, but apathy and depression can creep in, eroding the confidence and optimism that help one make it in a new, foreign job market. The study’s finding put the numbers to that defeating dynamic:

Controlling for week of entry, origin, religion, quarters of residency, ethnicity, assigned canton, age, and gender, being forced to wait one additional year for the asylum decision lowers the probability of being employed by about 4.9 percentage points. This is a large effect that corresponds to about a 23% drop compared to the average employment rate, which is about 21%. 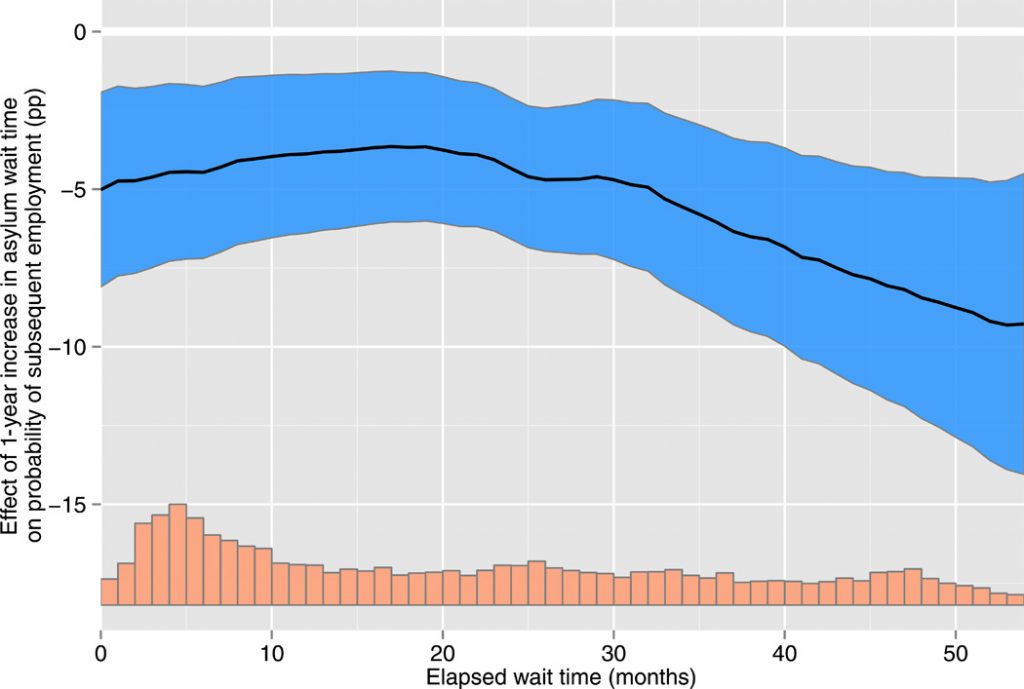 In other words, two similarly situated refugees, distinguished only by the fact that one waited for two years while the other waited for three, had stark differences in employment outcomes: the one with the shorter wait was 25 percent more likely to find a job.

As the researchers note, the asylum system easily could do more to set refugees up for successful integration. Part of the impediment is the abrupt shift that comes with being granted asylum; suddenly one is expected to become productive and self-sufficient after being kept apart from society and paid work for so long. Reducing the waiting period could go a long way toward helping refugees navigate that transition, and simply hiring more caseworkers would be a good place to start.

Investing even modest resources to speed up the process would pay off in the long run. As more refugees gain employment and contribute to the local economy, their success can help build public support for resettlement programs. Backlash against refugees would recede as the public observes the system working well to the benefit of both newcomers and the communities receiving them.

Reducing wait times could be just a first step toward creating an asylum system that puts refugees in the best position to integrate. Other aspects of the time in limbo could be effectively placing obstacles in their way, such as housing conditions and labor restrictions. Future research can shine more light on these effects and suggest potential reforms.

How does the asylum system affect refugee integration?