Taking the Oath of Allegiance at a naturalization ceremony is an emotional moment for many immigrants, and for good reason: it is the culmination of an often arduous process and many years of striving. Citizenship also opens a new chapter marked by possibility, from better job prospects to full participation in civic life.

Yet for many immigrants who aspire to become U.S. citizens, that moment never arrives. Since the 1970s, naturalization rates in the United States have lagged behind those of other major host countries. It’s a striking disparity given that the vast majority of immigrants in the United States express interest in citizenship. And since gaining citizenship often boosts immigrants’ social mobility and integration, the fact that so many are left behind points to a troubling loss of solidarity for their host communities.

What holds them back? Why are some immigrants more likely than others to complete the naturalization process?

IPL research provides the first concrete evidence of a major barrier to citizenship for low-income immigrants. The findings help explain why citizenship-promotion efforts face significant challenges, and they provide a blueprint for solutions to ensure that all immigrants have equal access to citizenship and its benefits.

In seeking to understand disparities in naturalization patterns, previous studies have focused on the immigrants themselves—individual characteristics like language skills, resources, or country of origin. Here, the researchers considered an external factor out of immigrants’ control: the high costs of the citizenship application process.

For many low-income immigrants, the price tag is daunting: $725 just to file the application, plus hundreds or even thousands more if you need English classes or consultations with immigration lawyers. Charitable organizations have stepped up to provide free language training, legal advice, and help navigating the paperwork. But the application fee has only become more burdensome, rising by 800 percent in real terms since 1985, when it was $35 (or $80.25 in today’s dollars). The federal government offers a fee waiver for the poorest immigrants—those with incomes below 150% of the poverty line—but for many others who aren’t destitute but struggle to make ends meet, that fee alone can put citizenship out of reach.

To address this potentially pivotal financial obstacle, IPL teamed up with the New York State Office for New Americans (ONA) and two funders dedicated to improving the lives of vulnerable New Yorkers, Robin Hood and New York Community Trust. Together we developed an innovative, public-private program called NaturalizeNY, which offers low-income immigrants an opportunity to win a voucher covering the naturalization application fee.

Veyom Bahl, a managing director at Robin Hood, said, “Robin Hood is proud to partner with the world-class researchers at the Stanford Immigration Policy Lab. Like us, they are committed to helping immigrant families build a strong footing for a new life in the United States. This research will help foundations, community-based organizations, and policymakers alike re-think how we invest in our communities for maximum impact.”

“This was a truly first-of-a-kind program, where a state agency, philanthropies, academics, and nonprofits created a way to provide direct financial support to help low-income immigrants apply for citizenship. The Immigration Policy Lab was excited to partner in its design and evaluation so everyone involved could understand its impact on immigrants and the New York community,” said Michael Hotard, an IPL program manager.

New York is home to the nation’s second-largest immigrant population, and its metro area has about 160,000 low-income immigrants eligible for citizenship. With a registration website in seven languages, NaturalizeNY focused on relatively poor New Yorkers who, by virtue of income or lack of eligibility for government benefits like food stamps or cash assistance, did not qualify for the existing federal fee waiver program.

NaturalizeNY used a lottery to award the 336 available vouchers, leaving 527 registrants without one. By following the two groups to see how many completed the citizenship application, researchers could measure the power of financial assistance, and in turn determine how much the costs may discourage others from naturalizing.

“Because NaturalizeNY uses a lottery system to equitably distribute vouchers to eligible registrants, for the first time we have clear causal evidence as to the effect of application fee vouchers on citizenship decisions. The magnitude of the effect suggests that it’s a critical lever to improve low-income immigrants’ access to citizenship”, said Jens Hainmueller, a professor of political science at Stanford and IPL co-director.

The Deeper Challenges  of Poverty

For the poorest immigrants, however, even eliminating the application cost isn’t necessarily enough to pave the way toward citizenship. They may not know that they’re eligible for a fee waiver, or they may find the process too difficult if they’re working several jobs, caring for children or elderly relatives, or unable to get assistance with the application.

Do these kinds of disadvantages keep these immigrants from becoming citizens? To find out, researchers identified 1,760 immigrants who registered for NaturalizeNY but weren’t entered into the lottery because they likely qualified for the federal fee waiver. While the voucher group’s average annual household income was $19,000 per person, this group’s average was just $7,500. Everyone in this group received a message during registration informing them that, based on their responses, they likely could apply for citizenship without cost and that assistance was available. 1,124 then received various “nudges” encouraging them to apply and to visit a local service provider for help navigating the process. 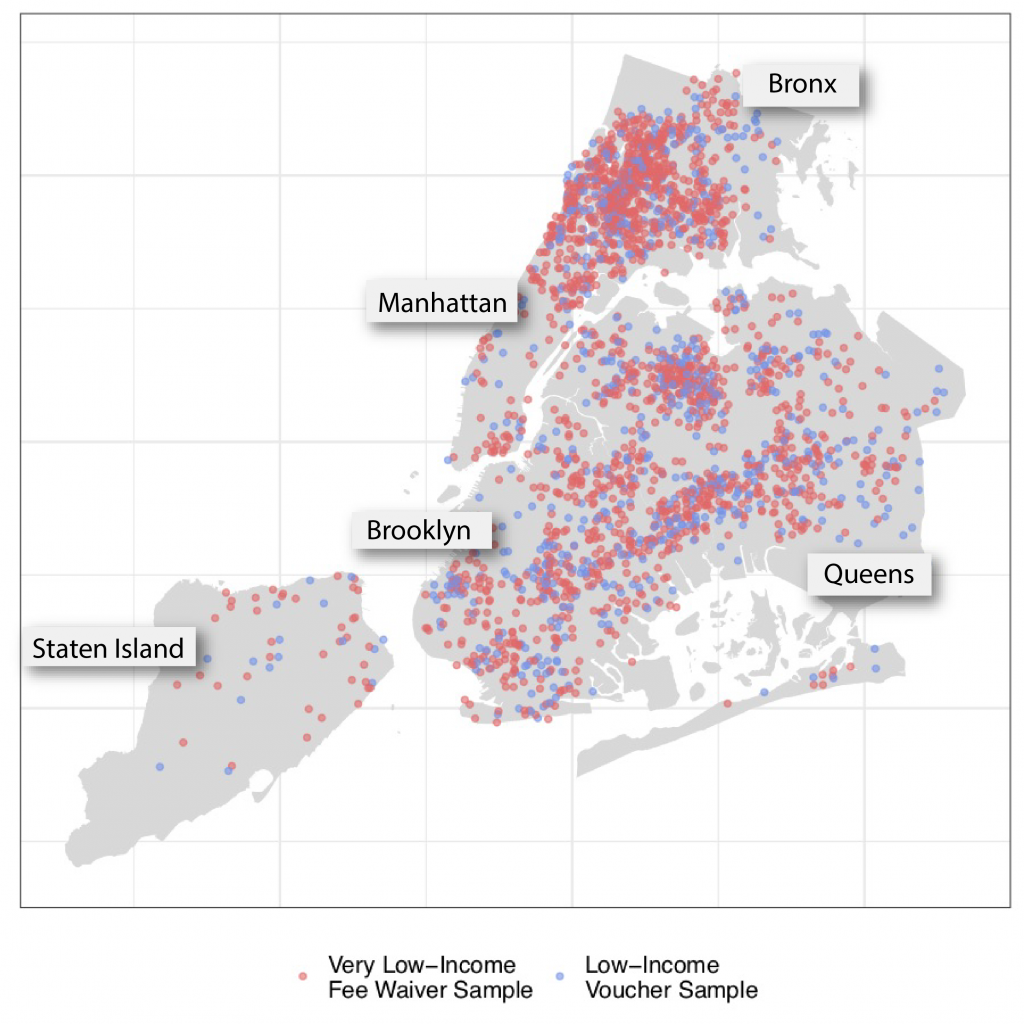 These nudges mimicked the real-world interventions many groups rely on to reach immigrants in need: emails, phone calls, text messages, an official letter by regular mail, and a $10 MetroCard intended to allay the cost of commuting to a service provider. Yet none of these encouragements made a significant difference in application rates beyond the 44 percent for those who received no additional encouragements.

In follow-up surveys, many participants said they had been too busy to apply. But when researchers returned to the data, they found that busyness couldn’t be the whole answer: the nudges were just as ineffective for single people as for members of large households, and for those of working age and retirement age.

“That so many ended up not applying indicates that challenges to naturalization run deeper than financial constraints,” said Duncan Lawrence, IPL executive director. “It’s clear that we have more to learn about what sorts of cost-effective nudges may or may not work. Raising awareness of the fee waiver itself may be an important piece of the puzzle, and we are actively working to understand how learning about the fee waiver affects application rates.”

For policymakers looking to address social inequality and give low-income immigrants a potential pathway to the middle class, the voucher results speak volumes. The current naturalization system imposes prohibitive costs on exactly those immigrants who might stand to benefit the most from the opportunities citizenship brings.

NaturalizeNY could inspire other cities and states to create similar public-private partnerships. ONA director Laura Gonzalez-Murphy emphasized the project’s actionable insights, saying, “The New York State Office for New Americans Opportunity Centers are leaders on the ground, establishing strong relationships and trust with immigrants and refugees from across the world. We are always eager to eliminate barriers for these individuals and help them on their path to citizenship. Thanks to our partners, including Stanford, George Mason, and SUNY Albany, we now have a unique project to paint a real picture of the current immigration system and see where opportunities for positive change may arise.”

At the federal level, U.S. Citizenship and Immigration Services (USCIS) recently lowered the fee for applicants between 150 and 200 percent of the poverty level. As this research illustrates, however, the financial barrier remains decisive for low-income immigrants above that range. Expanding this tiered system, with wealthier applicants paying more, would allow USCIS to cover its administrative costs while keeping citizenship affordable for all.

These are relatively simple projects to fund and administer, and they have a potentially big long-term payoff: if becoming an American citizen makes immigrants more likely to pursue higher education, start a business, or enter a profession, then boosting naturalization rates would make for better integrated, more prosperous communities. 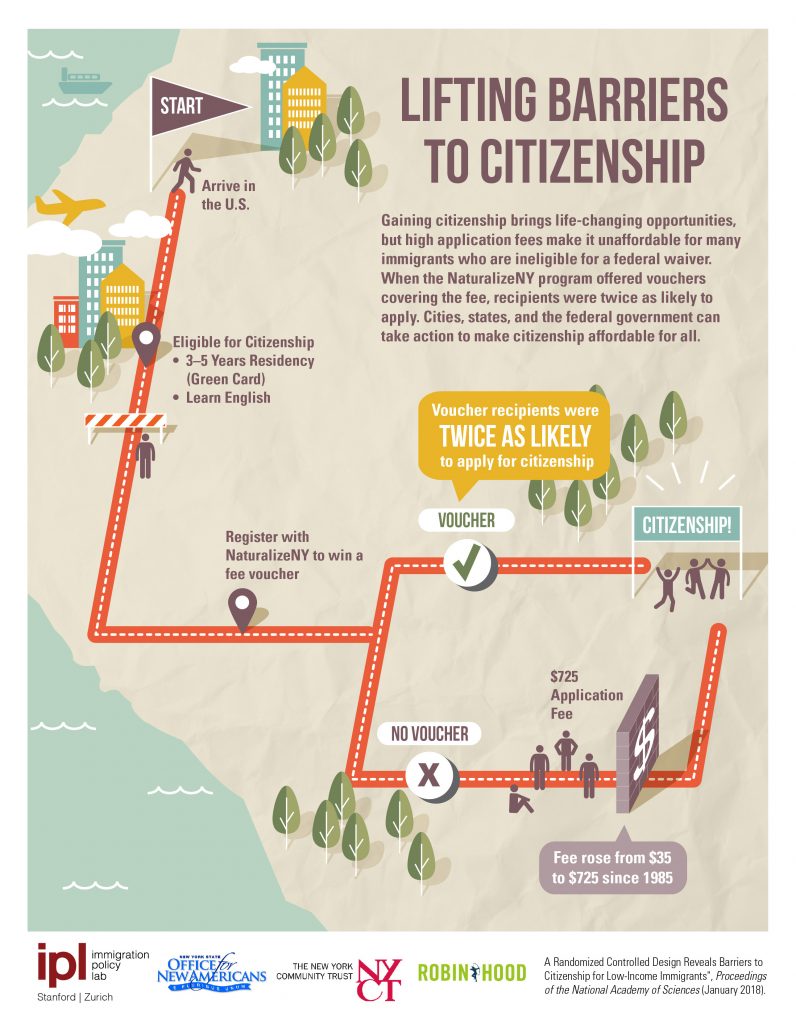 How can barriers to naturalization be lifted?