Yet public opinion toward refugees is more complex than the blaring headlines would suggest. Humanitarian principles contend with concern for one’s own country, and some groups may be shunned while others are welcomed with open arms. What kinds of asylum-seekers are Europeans willing to accept? Without answers, policymakers have struggled to respond in ways that not only honor international commitments but also inspire domestic support. They urgently need a map of the public mind if they are to build the political will to accept and integrate refugees. In a wide-reaching study of 18,000 Europeans in 15 countries, we pursued the insights they need to navigate the crisis.

We discovered a striking consensus as to which asylum seekers are preferred. Whether young or old, rich or poor, on the left or right, far removed from the crisis or at ground zero, Europeans tend to reward certain characteristics while penalizing others. Economic considerations, humanitarian concerns, and anti-Muslim sentiment are foremost in their minds.

Our respondents evaluated profiles of hypothetical asylum seekers and decided whether to admit or reject each one. The profiles randomly varied along nine attributes: age, gender, religion, language, previous occupation, consistency of asylum testimony, special vulnerabilities, country of origin, and reason for migrating.

Among those most likely to win acceptance were asylum seekers with professional skills and proficiency in the host country’s language—those who are expected to benefit rather than burden the local economy. At the same time, respondents were highly sensitive to applicants’ personal experiences of persecution, war, and tragedy. Those with consistent asylum testimonies, and those considered especially vulnerable, were privileged far above applicants seeking economic opportunities. Undercutting this desire to help those most in need, however, is a consistent bias against Muslim asylum-seekers, who were 11 percentage points less likely to be accepted than otherwise similar Christians. Notably, this bias was twice as large among respondents on the right as on the left of the political spectrum. 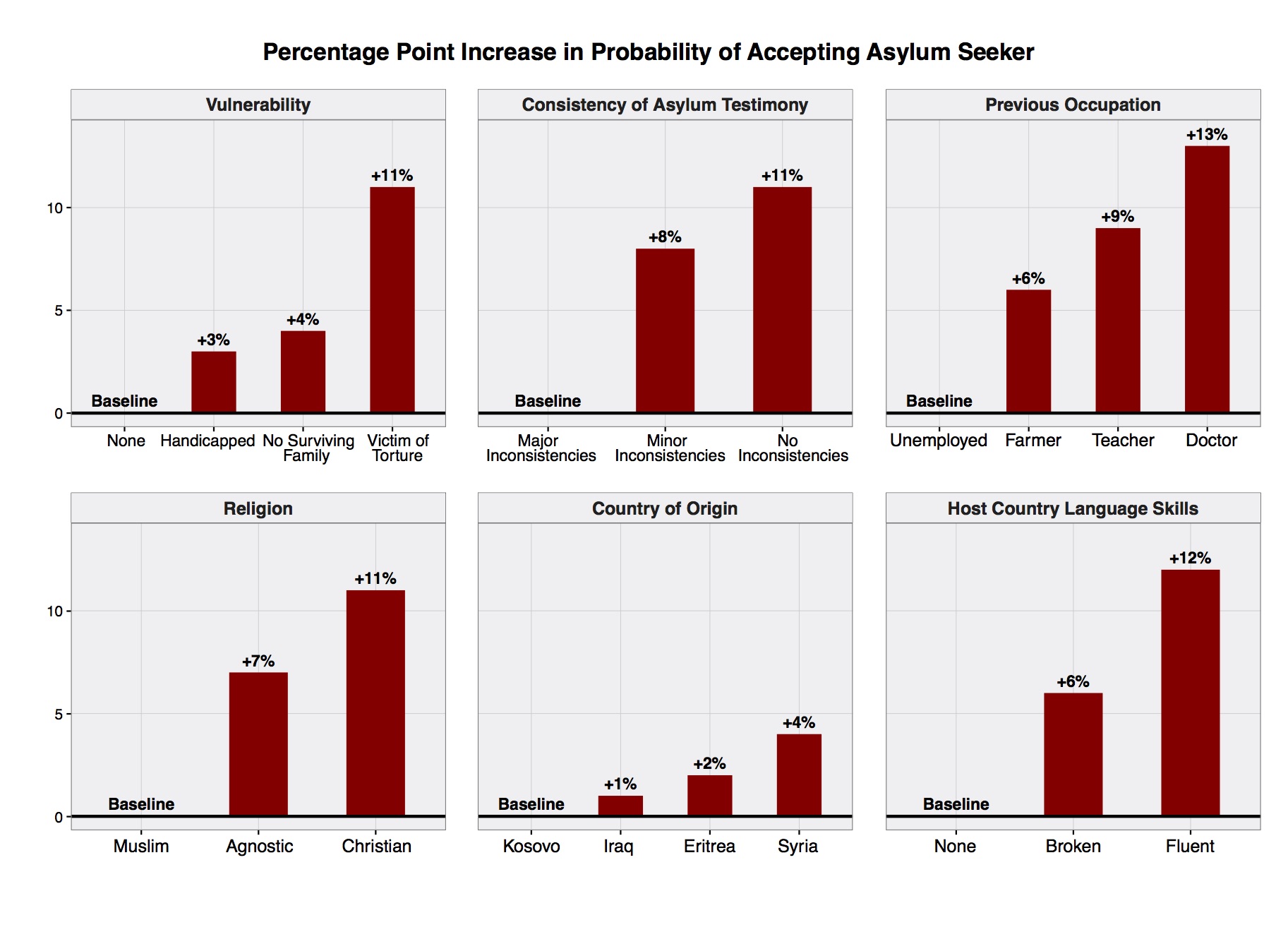 European policymakers, then, must respond to public opinion that is complex, contradictory, and often in conflict with the requirements of international law, which holds that asylum claims not be judged by factors like religion and employability. And the human face of the current crisis doesn’t match the public’s preference for highly skilled, fluent, and non-Muslim asylum seekers. Yet the Europeans’ sincere concerns, both for the refugees’ plight and for the well-being of their own societies, point to a way forward. To ease social tensions and create greater acceptance of asylum seekers from all walks of life, policymakers should speak clearly to their deservingness, vulnerability, and ability to contribute to their new homes. The more Europeans come to see refugees as valued members of their communities, the more these newcomers can successfully integrate and unlock their potential.

Europeans Would Accept More Refugees—If the Asylum System Were Fair

Positive messages like this could resonate more powerfully if coupled with an asylum system that promoted European solidarity. The present system, however, leaves a handful of countries overwhelmed by the influx of desperate people on the move. The Italian Coast Guard operates at full tilt to rescue boatloads of migrants at sea; in Greece, sprawling refugee camps housing tens of thousands have stretched the country to its limits. Local institutions are buckling under a backlog of asylum applications, leaving many asylum seekers in limbo.

Under the current Dublin Regulation, the EU member state where an asylum seeker first arrived is responsible for the application. Since the refugee crisis hit, many have argued that the Dublin status quo is not only logistically unsound but also inherently unfair,  given that most asylum seekers today come through the southern border countries. A campaign to reform the Common European Asylum System (CEAS) has picked up steam over the past year, with proponents calling for greater solidarity and a fairer sharing of responsibility for refugees. Our survey found potentially decisive support for that campaign.

Given the high costs and social unrest that some countries have experienced while accommodating large numbers of refugees, one might think plenty of Europeans would want their own country’s share to be as low as possible. Most countries would see an increase if the EU moved to a proportional allocation system, which would take into account each country’s population, GDP, unemployment rate, and the number of applications already received. Yet a large majority of respondents favored the allocation of asylum seekers in proportion to each country’s capacity—even if that system brought larger numbers into their own country.

This principle of proportional equality appears to be deeply engrained in the public’s understanding of fairness in the world. When respondents were provided additional information about the options presented—the status quo, proportional allocation, and an equal number of asylum seekers for each country—majority support for proportional equality remained nearly unchanged. This suggests that the norm is so widely shared, and so intuitive, that it doesn’t need to be explained. And when respondents were told how many asylum seekers each option would send to their country, allowing them to easily pick the one with the lowest number, proportional allocation saw decreased support in most countries but still won a 56% majority.

This preference was remarkably consistent across the surveyed countries, including major EU powers and new members, border and interior countries, and ones with few and many asylum seekers. It persisted, too, among respondents on the political left, right, and center.

In the years since the crisis hit, the world has viewed the scale of the human tragedy and called on European countries to work together to protect and provide for the refugees. Our study shows that there’s strong desire for cooperation and coordination, but that desire is thwarted by the Dublin Regulation system. Beyond the refugee crisis, this shows that voters care about how international institutions are designed, not just about the results they deliver for individual countries.

European leaders may worry that any increase in asylum seekers brings the risk of public backlash and a loss of political position. But these results point to a consensus broad and strong enough to empower them to move confidently toward reforming the system.

What kinds of asylum policies would Europeans support?