On a hot, windy day in the town of Arlit, Niger, the local transit center is thronged with people. As buses come and go, waiting travelers are approached by a friendly stranger, notebook in hand. Where are you from? Where are you going? Why did you leave home? These simple questions go to the heart of the migration trends captivating policymakers and researchers around the world. The answers, as important as they are, can be difficult to obtain. Sometimes the best approach is the simplest: asking migrants, directly and in person, about their experiences.

Widespread media coverage of overcrowded boats of young African men contributed to a growing sense that Europe was emerging as a destination of choice for those claiming a fear of persecution but primarily seeking economic opportunity, eroding an already fragile commitment to asylum and refugee protection in the region.

The policy response to a perceived surge in African migration was swift. Under pressure from European governments, Niger criminalized human smuggling in 2015. The European Union (EU) ramped up its policing of key border routes in Africa and on the Mediterranean, increasing the pace of deportations, partnering with Libyan militias to detain migrants, and seeking to deter potential migrants before departure. And the EU launched an emergency trust fund to address the root causes of irregular migration, pledging over 4.5 billion euros to projects across West and Central Africa. At a moment of political crisis, these policy moves were motivated by assumptions about who was on the move in West and Central Africa, where they were headed, and why.

In an IPL project fueled by data collected at transit hubs by the International Organization on Migration (IOM), our researchers uncovered new insights into the motivations and journeys of West and Central African migrants. While much media attention and policymaker concern are devoted to Africans heading for Europe, the researchers found that only 10 percent of migrants from this region intend to travel there. And even as violent conflict captures international attention as a key driver of migration, almost three-quarters (74 percent) of these migrants said economic pressures shaped their decision to move.

In West and Central Africa, where migration across borders often goes uncounted and individuals on the move are particularly hard to learn about, IOM mounts an impressive effort to count and survey migrants. During 2018 and 2019 across six countries in 36 key transit locations, called “flow monitoring points” (FMPs), IOM surveyed more than 88,000 migrants from the over 4.5 million whom they recorded journeying through the region. These surveys asked migrants about their background, motivations to move, and experiences along the way. 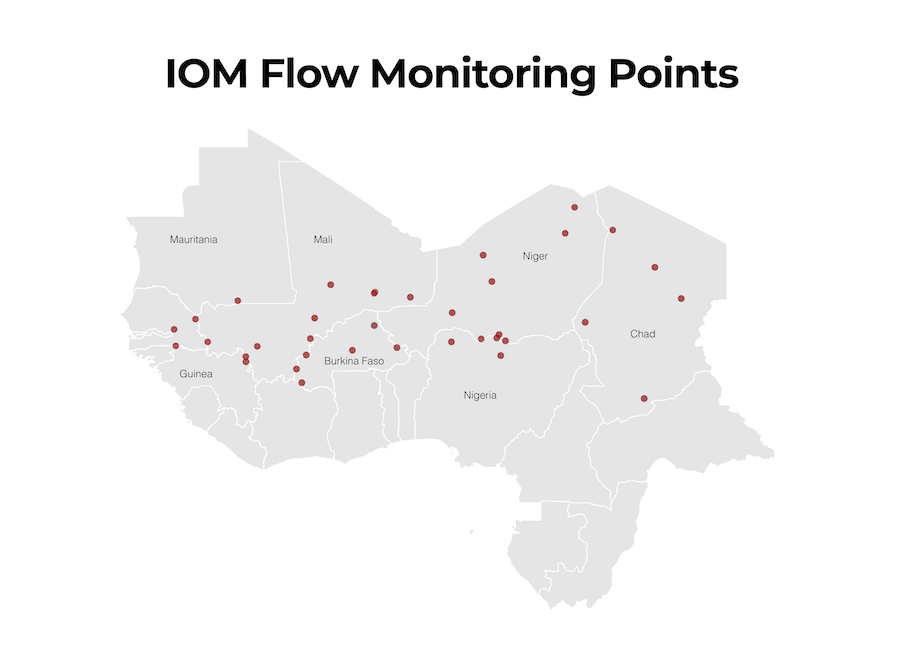 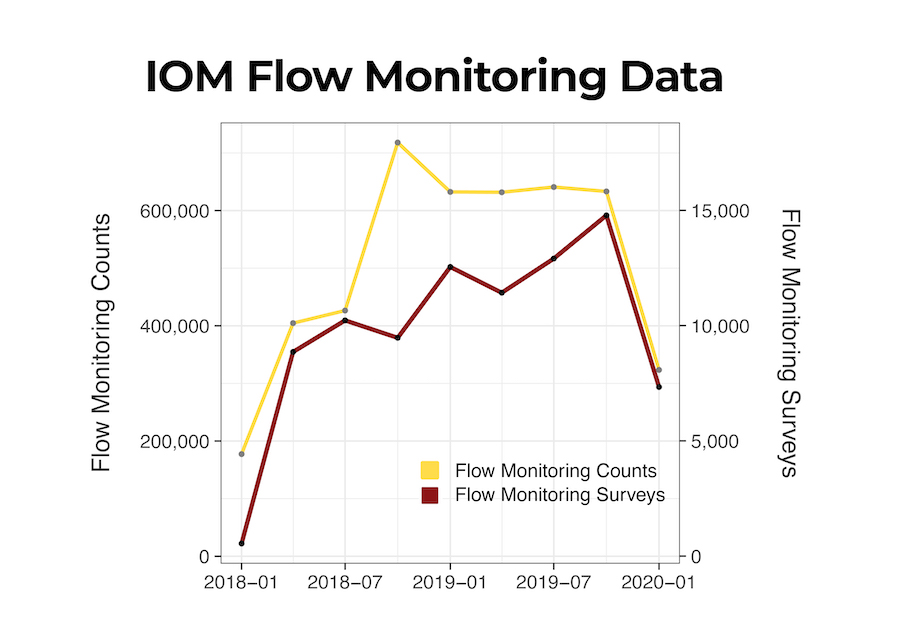 While unique in its coverage, The IOM data presents a few methodological challenges for researchers seeking to better understand migration patterns:

To account for the varying probabilities of being surveyed at each FMP, the researchers looked at each FMP by month and calculated the ratio of the number of surveys to the number of migrants whom IOM recorded as passing through. This allowed them to amplify or downplay individual responses based on respondents’ likelihood of being included in the sample.

To account for the potential re-sampling of individuals who travel farther and pass through multiple FMPs, the researchers only used surveys administered at the first FMP that migrants would reach based on their departure location and the region’s road network. In these ways, they corrected for the over-counting of migrants from more intensively surveyed FMPs, as well as those who traveled further and passed multiple FMPs.

So, who migrates, and why? Here are some of the key profiles of migrants:

Notably, the IPL researchers found that only 10 percent of migrants in West and Central Africa intend to travel to Europe. Among those who do want to live in Europe, 78 percent are from Nigeria, though Nigerians comprise only 16 percent of all migrants. Compared to migrants who intend to stay within Africa, individuals with intentions to migrate to Europe are more likely to be single and unemployed, but they are also more highly educated: 91 percent have secondary education or above compared to 42 percent of migrants intending to remain within-Africa. Of all migrants who intend to stay in Africa, 70 percent say that they intend to move to a country that borders their departure country.

When asked to indicate reasons for migrating (and there may be multiple reasons), 74 percent of survey respondents cite economic factors, such as searching for jobs or engaging in seasonal work-related migration; 25 percent cite family-related factors, such as following family and friends or meeting them in a final destination. Only 3.5 percent of migrants say they are moving because they fear for their safety.

However, while people tend to report only what they perceive to be influencing their decision (“proximate causes”), other “root” causes could still be at play. For example, a migrant may indicate that he chose to migrate to get a better job, but violence could be part of the reason there aren’t enough good jobs back home.

The researchers find that men are more likely to migrate than women: only 17 percent of within-Africa migrants are women. Female migrants make up a larger share of those who are motivated to migrate by family reasons (like following family or friends) compared to those motivated by economic or safety reasons.

As IPL continues working with the IOM data, the researchers intend to examine evidence and patterns of “mixed migration”: the idea that migrants can have several different overlapping and changing motivations. What is the variation in motivations among migrants who come from similar places, who share the same intended destination, and move around the same time? And how do motivations change as migrants move further in their journey

Developing a coherent and comprehensive approach to African migration depends on a clear understanding of what cross-border movement looks like in West and Central Africa, what factors are driving people’s migration choices, and how the movement of people is or isn’t responsive to policy changes in Europe. These are difficult questions to answer given the limited evidence on African migration and how challenging it is to measure patterns of migration through censuses and household surveys. This effort and ongoing work with the IOM data provides a path forward to answer these questions that are critical for policymaking.

Who is moving in West and Central Africa and why?

Only one out of ten people moving across countries in West and Central Africa is headed to Europe.

How do Refugees Decide Whether to Return Home?
Middle East & North AfricaPublic OpinionRefugees